React 17 is our stepping stone

Did you ever want to upgrade a rather big React application of yours? I bet you did. So what was your plan?

At first, you were excited but then you realized that this is way more challenging than you expected in the first place. Why? Because you had to upgrade the whole codebase in one big step following an "all-or-nothing" approach.

This strategy works eventually but for large or legacy codebases it might be tough, time-consuming and a bit risky.

React 17 will make this way easier since it will let us use React trees managed by one major version inside a tree managed by a different one. That way we will be able to upgrade parts of the codebase to React 18 while the rest will stay in React 17.

So React 17 prepares the ground for the upcoming major releases without adding any new developer-facing features so we can upgrade easily to it.

Its main goal is to help us push forward and upgrade gradually old and large React applications to the upcoming major versions without leaving anyone behind. That is why it is called a "stepping stone" release.

How cool and useful is that!!!

# What was the main issue React 17 had to tackle?

The main problem React 17 had to deal with so we can have component trees that use different major versions, is the way that the library itself handles events.

React since its early days uses event delegation. This means that an event handler attached to a DOM element inline is actually attached to a parent container. React uses the document itself as the container.

The example above is not super-accurate but you get the picture regarding events and the way they are attached to the document.

This pattern might be a bit fragile when we have multiple React component trees that use different major versions. Think about this example.

Imagine that a nested tree wants to block the events' propagation for some reason. Unfortunately, the blocked events will still reach the outer tree because of events' delegation to the document. We said that all events are attached to it, right? As you get, all this is getting difficult to handle by using different React versions.

The solution was to replace document with the root Node into which every React tree is attached. That way things are gettings simpler since we don't have all events across all trees attached to one common container (the document) anymore. 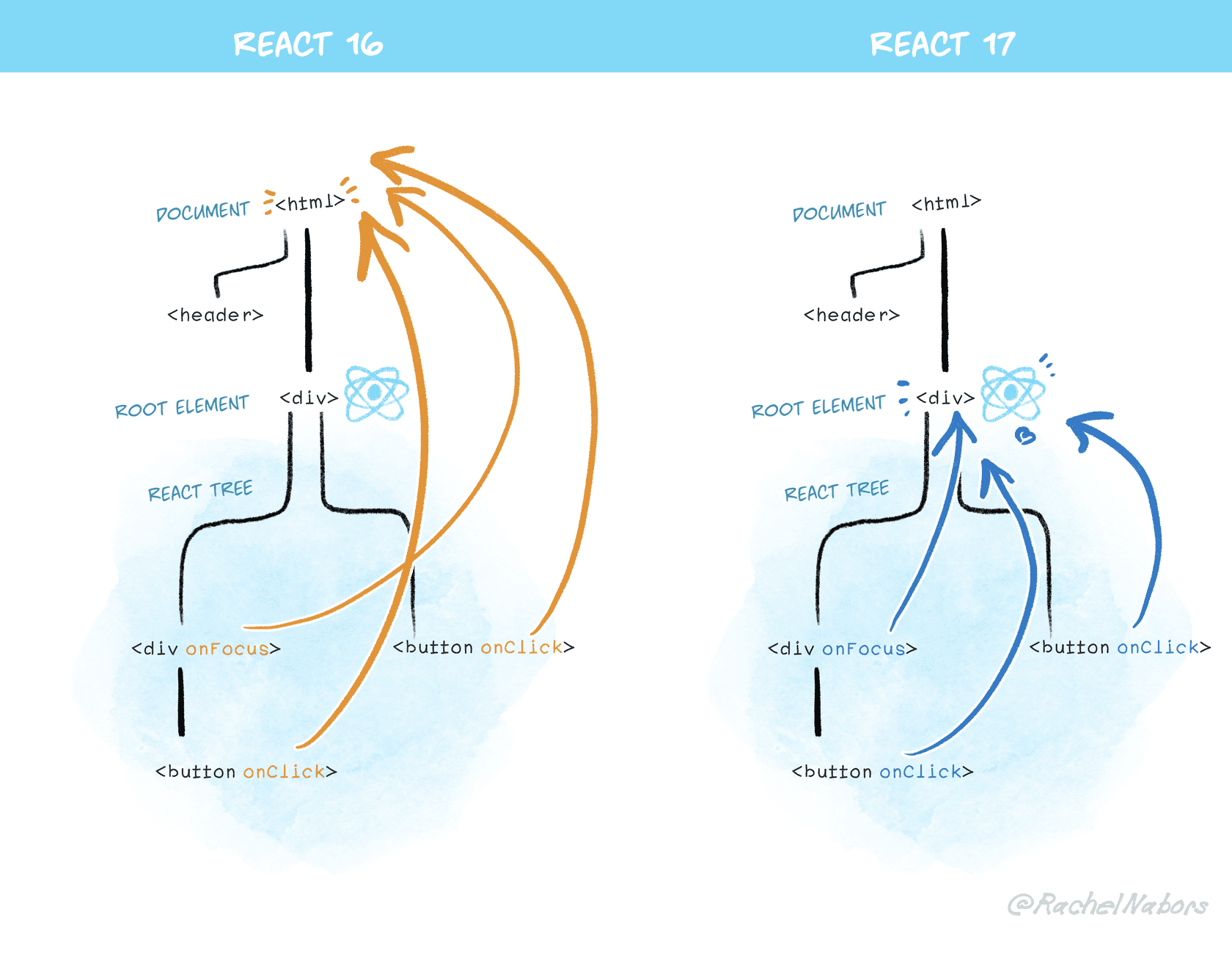 Thanks to this change, we can embed React way easier into apps built with other technologies like jQuery etc which is extremely beneficial especially for legacy apps.

As we said before, there are no actual developer-facing features but there are 2-3 changes we should mention here:

React 17 is a stepping stone release that will help us move easier to the upcoming major versions of the library. It doesn't introduce any breaking changes so we can easily upgrade to it.

Right now it is in Release Candidate so nothing stops us from getting our hands dirty and start playing with it.

We can install it with:

Remember, this is not 100% stable yet for production apps. Cheers!!